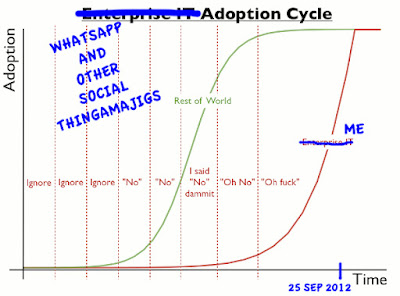 Back in 2007, there was a short period of time that my good friend Deputy Public Prosecutor Yang Ziliang tried to convince me to start using Facebook.

“It’s gonna be the new Friendster,” he said.

“What for?” I asked. “I’ve already got Friendster. I don’t need any other social thingamajig to complicate my life.”

For the record, I did start using Facebook some time thereafter.

I can’t remember why, but I suspect it was because all my friends had moved to Facebook and Friendster had become a ghost town.

It’s not that I don’t have a smartphone (although I bought mine some time after everyone else bought theirs so I guess the principle underscored by the graph above still applies).

It’s just that I was stubborn and purchased a Palm Pre because I’d been using Palm PDAs since 2003, and I was, like, brand loyalty and all that jazz.

Unfortunately, because (and, perhaps, even though I knew) Palm had been losing market share for some time, many apps were never developed for the WebOS platform and probably never will be.

One of these apps is Whatsapp.

I’ve known of Whatsapp’s existence for a while, but I never really realised what I’d been missing out on until the night before, when I hijacked my colleague’s phone and started messing around with Whatsapp.

And I was like: OH MY GOSH THIS IS SO FUN! THE LAST TIME I DID STUFF LIKE THAT WAS WHEN MSN WAS THE TOOL EVERYONE USED FOR CHAT AND…

So I’d like to announce that I’ll be getting a new phone when my mobile contract expires in three weeks’ time.

This phone will have Whatsapp support, and you will know this when you see the words “WHATSAPP ME” appearing everywhere as prominently as a Bat-Signal.

In the meantime, text me. Or call me. Maybe.

P.S. Mr Yang, if you’re reading this: I AM PUBLICLY CONSUMING HUMBLE PIE AND IT TASTES LIKE THAT PIG-BRAND CIDER WHICH YOU AND CORAL ALWAYS SERVE AT YOUR HOME.