While the principles of leadership have interested me since I was young, I’ve been thinking more about these principles in recent months.

That plus this picture I recently saw floating around on Facebook comparing the difference between a boss and a leader inspired me to write about this topic.

The content of the visual is more or less spot on, but it’s also quite ugly. So I thought I’d create my own visual for posterity: 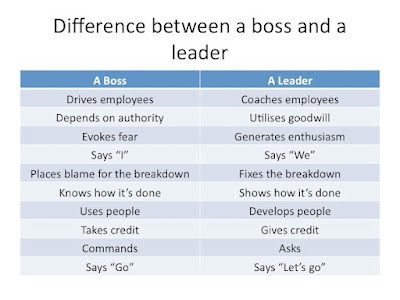 For the less visually-inclined, the difference between a boss and a leader can be summarised as thus:

Is this true for you?

In any case, come back again tomorrow for part 2.