EDIT (Wed, 22 Jun 2011 @ 3.22pm): Ng Tze Yong, Social Media Editor of The Straits Times has left a comment responding to this point. Please scroll down to read it.

I’m extremely disappointed with @stcom (the Straits Times’ Twitter feed) for what I feel is a failure to promote a well-rounded discussion, as well as a failure to respond appropriately to feedback.

Earlier today, I saw a tweet by @stcom that read:

If you can’t see the graphic, the tweet is:

“ACS old boys and Rafflesians: How do you feel about the appointment of ex-RJC principal Winston Hodge as ACS(I) principal?”

I was both appalled and amazed at the same time that the person in charge of the Twitter feed had the temerity to do that – especially considering the fact that the original Straits Times news article mentioned that Winston Hodge had been a principal at St Gabriel’s Secondary School as well.

(NOTE: The article has been changed somewhat since the news broke. In any case, Channel News Asia also included the above-mentioned fact, so the information must have appeared in the original press release or interview, at least.)

I need to state two things before I continue:

So my response to @stcom was as follows: 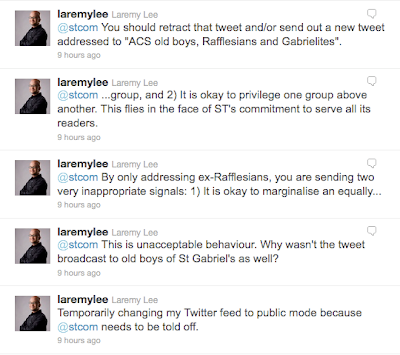 Again, if you can’t see the image, my response was as follows:

Temporarily changing my Twitter feed to public mode because @stcom needs to be told off.

@stcom, This is unacceptable behaviour. Why wasn’t the tweet broadcast to old boys of St Gabriel’s as well? By only addressing ex-Rafflesians, you are sending two very inappropriate signals:

This flies in the face of ST’s commitment to serve all its readers. You should retract that tweet and/or send out a new tweet addressed to “ACS old boys, Rafflesians and Gabrielites”.

To reiterate, my beef is with @stcom’s lack of inclusiveness in gathering views and opinions from an equally important group of people.

Unfortunately, since my response to @stcom, it’s been radio silence all the way.