So. Part of the dirty little secret is that as part of OTOT publicity, we’ve been involved in e-mail and face-to-face interviews, pre-recorded radio broadcasts, etc. Now, one very interesting publicity activity/event of sorts which I’ve had to do is to answer two questions via e-mail for The Sunday Times.

My responses are going to be used in a Lifestyle section called ‘Bookends’, which contains information about books that a particular person is reading. I expect it’ll be published next Sunday, since I didn’t see it appear in yesterday’s copy of The Sunday Times.

Now, as we all may or may not know, Gilbert Koh a.k.a. Mr Wang of Mr Wang Says So fame launched his book of poetry last Fri. So, me being me, I decided to take a chance and ask the publishers if I could purchase a copy of Two Baby Hands before its launch, because the deadline for submitting my answers to the ‘Bookends’ column was way before the launch date. Suffice to say, the publishers said yes, and I became a proud owner of Two Baby Hands the week before last! 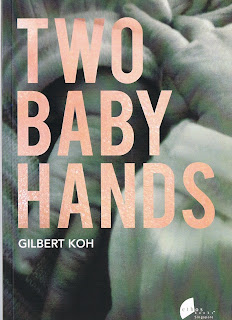 So this is the dirty little secret that I’ve had to keep for a week or so, because I thought it would’ve been rather immoral for me to gallumph around telling everyone about my purchase.

But what’s the big deal, you may ask, hypothetically, since only five persons are supposed to be reading this, and not all five of those persons may be of the question-asking genus. Some may not even be persons at all, but that is another story for another time.

Well, I’ve been reading Gilbert Koh since 2002/3 when I chanced upon “Chiang’s Heat Stroke” in an anthology called From Boys to Men: A Literary Anthology of National Service in Singapore. So it’s a big deal to me, because I’m a big fan of Singapore + Malaysian Literature, and Mr Wang Says So and Gilbert Koh and… Yeah. You get the idea. Also, I thought it was very good business sense on the part of Ethos Books so I wanted to share this with everyone, in case something similar crops up in your own life in the future.

So! I’ll be blogging about my answers and why I talked about those books some time next week (or the week after) regardless of whether the Bookends column is published or not (because the silence will give me something to talk about too). In the meantime, keep on supporting Singapore + Malaysian literature!

Back in Singapore.
Free Download: Act One of Full Tank!