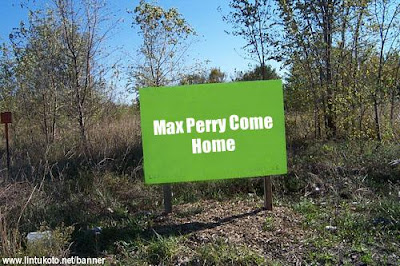 well, this post did start off as a tribute to Max Perry, cos he flew away on Christmas Eve. Max Perry was also a Christmas bird, as my sister used to say, because he was always dressed in Christmas colours. anyway, i never did get round to finishing this post so i guess i’ll just turn it into a general update.

Max Perry was my mum’s lovebird, and although i hated it at first because it was so noisy, i think that i eventually grew to love it over time. it was such a cockster, but in a cute way, as you can see in this photo: 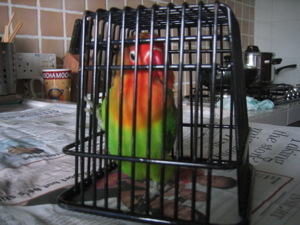 my mum was cleaning it on Christmas Eve, but she forgot to close the kitchen window while she was doing it, so i guess it took its chance to escape then. it sat on a tree opposite our flat for a while, and i actually did try to climb the tree to go and get it down but it was like too tiring so i gave up and went back to my flat to throw wads of wet toilet paper at the damn bird. oh and while doing so, i was like, “eh bird, come back. wait the crow eat you up then you know.”

after a while, i think it got kind of bored so it flew off further where it did meet its tragic end because of some bloody big, black crow which intersected its path and probably ate it for breakfast. it was quite sad, not only because my mum and i had to watch it die, but because we saw it being truly happy and free for a while. and when it took off in flight, in a flash of brilliant green, it was so beautiful for that two seconds. before we heard it squawk like a chicken and become a hearty meal to a predator that really should just be shot and killed forever.

so this one’s for you, Max Perry: 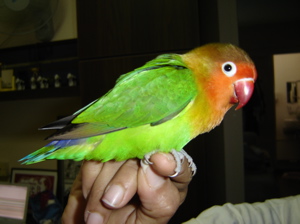 you always had a squawk, chirrup and chirp for us no matter what the time of day was, or how irritating we were to you. because your principle was always to fight fire with fire and pre-emptive strikes, wasn’t it, you biter of fingers and hands, you. you were fat, noisy and chicken-like but we miss you all the same. take care and be free wherever you are.

you were much loved.

well, i’ve tried to update the template and layout of this blog as best as i can and i think i’m almost done. it’s been difficult but the transition has been getting easier with each click, i guess. oh yar, and i know i have not been updating although i have thought about a lot of things i want to say. but i haven’t been at home enough to blog, so well, i guess you’ll have to wait until school starts again before you get more pearls of wisdom from me. hurhur 🙂

anyway, with regard to the links, i think i shall just link those people who have already linked me permanently on their blogs, as opposed to linking up every mother’s son or daughter. one reason is because it is more complicated to do so as compared to Blogger, but the real reason is that because i feel (and have always felt) that it’s not fair to give someone free traffic to his/her blog when he or she doesn’t return you the favour. so i am going to exercise my right to anality for a while and only link up said people who have already linked me up, and just bookmark the blogs of those people whose blogs i still stalk. until someone complains and asks me to link him/her up, that is.

ok, i am off to breakfast. have a Happy New Year, everyone!