An excerpt from The Tibetan Book of Living and Dying by Sogyal Rinpoche (1992):

“A CHANGE IN THE DEPTHS OF THE HEART

To reflect deeply on impermanence, just as Krisha Gotami did, is to be led to understand in the core of your heart the truth that is expressed so strongly in this verse of a poem by a contemporary master, Nyoshul Khenpo:

The nature of everything is illusory and ephemeral,
Those with dualistic perception regard suffering as happiness,
Like they who lick the honey from a razor’s edge.
How pitiful they who cling strongly to concrete reality:
Turn your attention within, my heart friends.

Yet how hard it can be to turn our attention within! How easily we allow our old habits and set patterns to dominate us! Even though, as Nyoshul Khenpo’s poem tells us, they bring us suffering, we accept them with almost fatalistic resignation, for we are so used to giving in to them. We may idealize freedom, but when it comes to our habits, we are completely enslaved.

Still, reflection can slowly bring us wisdom. We can come to see we are falling again and again into fixed repetitive patterns, and begin to long to get out of them. We may, of course, fall back into them, again and again, but slowly we can emerge from them and change. The following poem speaks to us all. It’s called “Autobiography in Five Chapters”:

The purpose of reflecting…is to make a real change in the depths of your heart, and to come to learn how to avoid the “hole in the sidewalk”, and how to “walk down another street”. Often this will require a period of retreat and deep contemplation, because only that can truly open our eyes to what we are doing with our lives.

…Why not reflect…when you are really inspired, relaxed, and comfortable, lying in bed, or on holiday, or listening to music that particularly delights you? Why not reflect…when you are happy, in good health, confident, and full of well-being? Don’t you notice that there are particular moments when you are naturally moved to introspection? Work with them gently, for these are the moments when you can go through a powerful experience, and your whole worldview can change quickly. These are the moments when former beliefs crumble on their own, and you can find yourself being transformed.

Contemplation…will bring you a deepening sense of what we call “renunciation”, in Tibetan ngé jung. Ngé means “actually” or “definitely,” and jung means to “come out,” “emerge,” or “be born.” The fruit of frequent and deep reflection…will be that you will find yourself “emerging”, often with a sense of disgust, from your habitual patterns. You will find yourself increasingly ready to let go of them, and in the end you will be able to free yourself from them as smoothly, the masters say, “as drawing a hair from a slab of butter”.

This renunciation that you will come to has both sadness and joy in it: sadness because you realize the futility of your old ways, and joy because of the greater vision that begins to unfold when you are able to let go of them. This is no ordinary joy. It is a joy that gives birth to a new and profound strength, a confidence, an abiding inspiration that comes from the realization that you are not condemned to your habits, that you can indeed emerge from them, that you can change, and grow more and more free.” 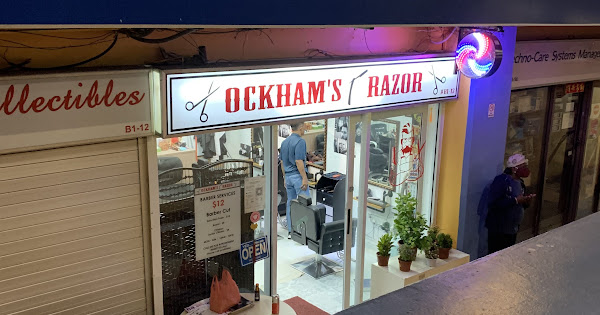 I couldn’t help chuckling last night as I walked past Ockham‘s Razor, located in Katong Shopping Centre. Their tagline should be: “The simplest solution to all your hairstyling needs!”

I’m surprised this community initiative isn’t more well-publicised, even though it’s been running for close to 1½ years.

So I thought I’d spread the word about Masjid Al-Istighfar‘s “Water for All” programme.

The mosque on Pasir Ris Walk has two water dispensers installed outside its premises to provide water to all passers-by.

I love the idea for two reasons: First, it’s the epitome of what it means to be human – unconditionally providing sustenance to all in need.

Second, it’s one of those concepts that people will knock down a peg at first blush – then stare, slack-jawed in awe, when they realise how ingenious it is.

This project is a simple yet brilliant way of generating goodwill in the community and beyond.

For context, the dispensers are conveniently located along a park connector frequented by joggers and cyclists.

All the mosque has to do: Be there to quench parched throats and effectively meet needs.

The returns from the compassion it invests in people for the cost of a sip of water? Priceless.

Now, imagine if all places of worship across Singapore did the same.

My hope is for a non-denominational group to take up the reins and coordinate it such that the nationwide project could be sponsored by businesses, as part of corporate social responsibility efforts.

This way, companies would be more willing to donate to such a cause; it wouldn’t be tagged to a single religious organisation, which might create perceptions of preferential treatment.