My review of Alfian Sa’at’s Malay Sketches is now up on the Quarterly Literary Review Singapore (QLRS).

Henry   Do you know what you can say? To a black man. On the subject of race.
Charles   “Nothing.”
Henry   That is correct.

Two years ago, a couple of friends and I watched the premiere of Charged by Chong Tze Chien, a play with a National Service setting that explores tensions between the Malay and Chinese communities in Singapore.

When the play ended, I exited the theatre with this unspoken sentiment: This was a great play that more ethnic Chinese Singaporean people need to watch so that they know how minorities in Singapore feel. And true enough, my friends had this to say collectively when we discussed the production over drinks: This was a great play – and we didn’t know Singaporean Malays felt that way. 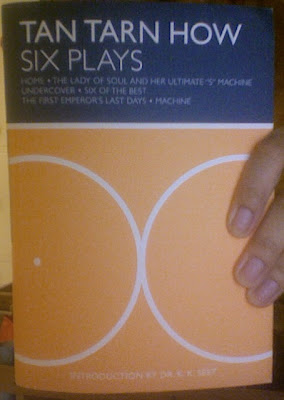 My review of Tan Tarn How’s Six Plays – the text which I was busy devouring in June while recuperating from my short stint in the Weapon X Project – is now up on the Quarterly Literary Review Singapore (QLRS).

This collection brings together six of Tan Tarn How’s best works thus far, written and produced over a period of 11 years (1992 – 2003). Prior to this, The Lady of Soul and Her Ultimate ‘S’ Machine (“Soul“) was published individually in 1993, and Undercover and Home were published in play collections that featured various local playwrights. The publication of these plays in one volume are, hence, important in providing readers and scholars of Singapore literature with a holistic overview of Tan’s concerns as well as showcasing the diversity of topics he writes on, while demonstrating Tan’s dexterity as a playwright when tackling a range of subjects.