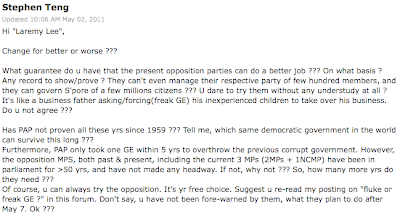 After reading my letter, this gentleman called Stephen Teng got so mad that he used 30 question marks in his reply to me.

Maybe this is why we need a Cooling-Off Day – to prevent Singaporeans from voting with their spleens instead of their heads.

I’m not usually a verbose person. However, he seems eager for me to continue the conversation. Hence, I will sacrifice some time off from doing work to respond to him.

Change for better or worse ???

Sorry – I’m not too sure which letter you were reading. I did not write about change at all.

What guarantee do u have that the present opposition parties can do a better job ??? On what basis ? Any record to show/prove ?

No, I made no guarantee that I have any records of the above-mentioned, because I never made any of those arguments. Please re-read my letter carefully.

They can’t even manage their respective party of few hundred members, and they can govern S’pore of a few millions citizens ???

These are your opinions, which you formed on your own. They can also be perceived as potentially slanderous to the opposition parties.

Nevertheless, this is Singapore. You are entitled to your own opinions, as well as potential legal responses based on the allegations you have made.

U dare to try them without any understudy at all ? It’s like a business father asking/forcing(freak GE) his inexperienced children to take over his business. Do u not agree ???

No, I do not agree because I never said anything about “try[ing] them”. Please re-read my letter carefully.

I will refrain from commenting on your analogy.

Has PAP not proven all these yrs since 1959 ??? Tell me, which same democratic government in the world can survive this long ???

Three things you may want to note:

Furthermore, PAP only took one GE within 5 yrs to overthrow the previous corrupt government.

You are attempting to rewrite history by saying that the then-Labour Front government was corrupt.

However, the opposition MPS, both past & present, including the current 3 MPs (2MPs + 1NCMP) have been in parliament for >50 yrs, and have not made any headway. If not, why not ??? So, how many more yrs do they need ???

I think the first question is best answered by yourself. With regard to your second question, I may be bald, but I can neither read minds nor look into the future. I’m sorry for not being able to answer your question.

Of course, u can always try the opposition. It’s yr free choice.

Thank you. I already said I have not made up my mind yet. Please re-read my letter carefully.

Suggest u re-read my posting on “fluke or freak GE ?” in this forum.

Thank you. I will politely decline because I have work to do.

Be balanced in criticism.
Voting and ballot secrecy.