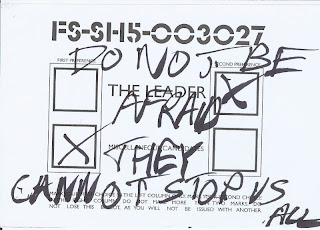 TL;DR: Your spoilt vote can be counted if the Assistant Returning Officer (ARO) deems it possible that there was intent to vote for a certain party.

I don’t know if this post will have any relevance, since I’m posting it so late on Polling Day.

But I thought I’d put it up for now and for posterity, to clear any misconceptions that people might have about spoiling their votes.

With reference to Section 7.5 of the Handbook for Parliamentary Election Candidates 2011:

…a ballot paper on which the vote is marked elsewhere than in the proper place, otherwise than by means of a cross or by more than one marking will not be treated as void if an intention that the vote should be for one candidate or group of candidate clearly appears, and the way the paper is marked does not of itself identify the voter.

How does the ARO do this? These images will make my explanation clearer (borrowed from 何思慧’s Facebook note):

Any mark you make in the box next to the insignia of a certain party = intent to vote for them.

If you draw a big cross over the whole piece of paper, the vote is counted at the point where the centre of the X falls.

The only way to make sure your vote counts is to place a nice ‘X’ in the centre of the empty box next to the insignia of the party you are voting for.

How are you looking at information today?
[SGE 2011] Rejected votes: A basic analysis.