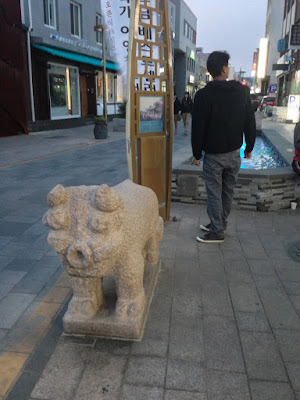 So Prem Vadiveloo and I took a little bromantic trip around Korea together last weekend.

Well, not around Korea per se; we only managed Seoul and Gyeongju.

Anyway, these are the highlights of our tour:

To clarify, the shampoo was for Prem – not me.

But all in all, a good learning experience in terms of imbibing Korean culture, Korean history, Korean beef and Korean rejection.

I went to Jakarta in March for a short break.

While waiting for my sister to finish her shopping, I jotted down some notes on my phone using Evernote.

It would’ve remained in Evernote were it not for this article which echoed what I wrote.

This is an expanded version of my thoughts.

Why are there more salespeople/sellers than shoppers?

For every one shopper around, there are five salespeople standing around not doing anything.

And this isn’t an isolated incident – I’ve seen it happening in almost every shopping mall I’ve gone to (and I’ve gone to quite a number, no thanks to sister dearest).

It’s the same for the roadside hawkers, the bazaar stall-holders and the security guards, to name a few professions that have a multitude of workers.

I’m no economist, so my analysis may have some flaws.

But I think there are a number of factors for the scenario I’ve outlined above, namely: the Indonesian population size, employment rates, the lack of a minimum wage and a lack of training.

For one, there are so many people in Indonesia (imagine MRT crowds during rush hour – but for the whole day) that they’re employed to do the most menial of labour.

For example, the security guards at the apartment of my sister’s friend (whom we stayed with) doubled up as gate-openers and barrier-lifters.

And the bus conductors (on the one harrowing bus ride we took) doubled up as safety- and security-ensurers, door-openers and stop-announcers.

But aren’t these jobs that can be done easily with technology and maybe one person, at most, to operate the technology?

Now I’m not exactly advocating that human beings be replaced by machines, but if you think about it logically, a shift toward technological replacements is one of the solutions to a decreasing population.

But back to my point: why are the Indonesians not making use of technology to do this work so that their people can be more productive and/or utilised more effectively?

Perhaps it’s political – that is, to make sure that everyone is employed, or unemployment rates are low, people are employed en masse to do these jobs.

The corollary of this: three to five people are paid on one person’s wage. This depresses wages and reduces their collective standard of living.

And if this practice of frivolous employment is allowed to go on unchecked, there is little incentive for companies to invest in technology to increase productivity.

At the same time, there are so many people concentrated in just a few occupations – the roadside hawkers are the most obvious, because they are EVERYWHERE.

You might argue: hey, demand and supply, man. The market will decide whether or not these phatties stay in business.

Ok sure. But if the roadside hawker goes out of business, what other options does he have? Be a bus conductor, a security guard or sell clothes at bazaars?

Which means that if the Indonesian government doesn’t do these three things:

the poor Indonesians are never going to escape from this vicious cycle of low wages and a low quality of life.

Sadly, this issue of employment, low wages and productivity is happening in Singapore too.

It’s most obvious in the construction and services industry in Singapore; Alex Au has written a post about this before.

What’s worse is that people are actually brought in from overseas to work as construction labourers and service staff.

“But Singaporeans don’t want to do these jobs!” – that’s the oft-quoted argument that Singaporeans themselves have unwittingly bought into because it’s been repeated so many times.

If you’re one of these Singaporeans, let me tell you a story.

Back in university, when we’d spend our time sleeping all day and staying up all night, one of the truth or dare games we’d play while drinking was “How much would you have to be paid to do x?”

Where x, of course, is something that the people at the table would be most disinclined to do.

One of the most hotly-discussed Xs was “butt sex with a guy”; all the guys at the table then were/are heterosexual, so our preferences have never been to have butt sex with men (but we have no prejudice against anyone who is open to this idea).

As the question went around the table, and the answers ran the gamut from $1000 to “You pay me how much also I will never do it!”, one of the guys weighed in with his expert opinion on the subject.

There was a brief silence before we all broke out into laughter.

“Very low lei!” someone else said. “Are you sure you’d be doing this unwillingly or not?”

My point of the story is this: anyone can be bought for a price.

If you pay someone enough to do something – where “enough” is enough from her or his perspective – she or he will do it.

So the amount you pay to someone to get her or him to work for you will translate into the numbers of and the quality of people you get.

But isn’t that what we’ve known all along, especially in the case of political salaries in Singapore? Based on my newfound conviction that the Internet is a giant brain, I’d like to pose the above-mentioned question to people who have travelled more than I have.

The rationale here is simple: you’re an expert, I’m not. I can trawl the Internet for answers, but the most efficient solution is really word-of-mouth, then research to confirm.

Some considerations I have: