In the song, Michael Stipe sings the lines “That’s me in the corner/That’s me in the spotlight/Losing my religion”. The phrase “losing my religion” is an expression from the southern region of the United States that means losing one’s temper or civility, or “being at the end of one’s rope.” Stipe told The New York Times the song was about romantic expression. He told Q that “Losing My Religion” is about “someone who pines for someone else. It’s unrequited love, what have you.”

It’s getting quite troublesome to own and maintain a scooter.

I had to travel all the way down to Bukit Batok today to order a front tyre – a front tyre – for Pooters. I have to go back again on Fri to get it fixed on.

Mind you, this is in the context of having failed an annual roadworthiness inspection – Pooters’s first failure – because the front tyre was worn out (unbeknownst to me), and having to return for another inspection after replacing the tyre.

In Singapore, the Certificate of Entitlement (COE) policy effectively endow your vehicles with 10-year lifespans.

Most people sell sell/change their vehicles when their COEs expire, because it’s the most cost-effective thing to do.

COEs can be renewed – at a price pegged to prevailing rates.

That may not be the most sensible thing to do if you look at the numbers alone; the price of a renewed COE may be more than what the machine itself is worth.

This Monday will mark Pooters’s ninth year of existence. It has one more year to go before circumstances dictate whether I hang on to it – or I send it to the knackery.

I’m leaning toward the latter because, frankly, I’m losing my religion.

On one hand, having your own personal transport in Singapore – regardless of how many wheels it has – really makes you more mobile: a boon in a country with a ‘developing’ (for want of a better word) transport network.

On the other hand, what exactly am I conserving when I hang on to Pooters? Memories? Experiences? An out-of-production scooter?

But at what cost? Shouldn’t I save all the trouble and hassle – the lengths I have to go to – by getting a new scooter?

Should I even get a new scooter at all?

I’m still trying to figure that out.

Was heading home from a friend’s solemnisation lunch last Saturday when a sudden downpour hit.

The skies had been grey for some time but I thought the clouds would hold.

They didn’t, and I unfortunately was forced to take shelter at the SMU building.

It was extremely miserable and frustrating because I could see the skies ahead were blue and clear but the clouds were covering the portion of town where I was at.

A geospatial visual (I’m the blue dot and I wanted to head north):

I think I’m getting a bit too old for this and I’m wondering if it’s time to add to the stable and get an OPC.

I got into a minor scrape while on my way to Holland Village for dinner last night.

It was raining but I was doing my thing i.e. being safe.

However, this hmstrfckr of a driver came along and nearly sideswiped me after the right turn from Farrer Road into Holland Road.

As a reflex action, I jammed on the brakes but Le Poots skidded and I took a tumble.

(Yes, I know I could’ve corrected the skid but hindsight is always 20/20.)

Anyway, it wasn’t as bad as I thought it was going to be. I took the impact of the fall on my left side so I have contusions/abrasions on my elbow and left leg.

My phone bore the brunt of it though: 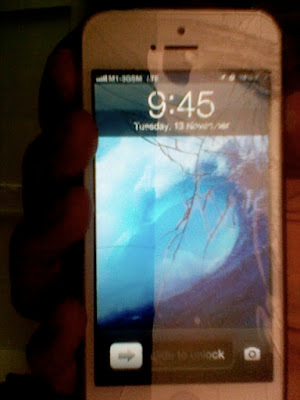 Anyway, I picked myself up, dusted myself and my bruised body/ego off and continued on to dinner.

It was only after dinner that I realised Pooters was missing a cylindrical plate.

I was, like: do I go look for it? Do I just send Pooters to the mechanic and ask him to order a new part for it?